Lamanai Eco Tours is by far the best place in Belize, if you don’t take a tour with them, then you’ve certainly missed out on a great day. Situated on The New River, they have many boats to take you on a scenic and unforgettable trip up the river. 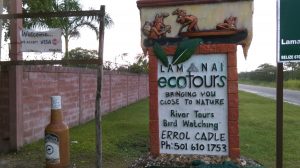 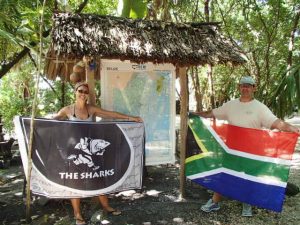 The owner, Errol Cadle, is an energetic, fun loving character and a very keen fisherman bursting to share his love of the river (and of course the fish) and his country with you. 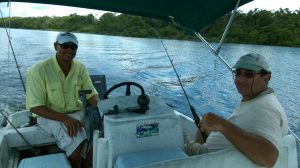 The company started twenty-four years ago and is now complimented with a staff of twelve, and some of the staff have been in with the company for up to fifteen years. Tours include scenic river tours, Bird watching tours, tours to the ruins and fishing tours. I hopped off the boat to go to the ruins while Ali continued with Errol to fish – a win-win situation.

A little history of the river; The first name was Sactam, meaning river of white banks for the Maya’s around 1600AD. When the Mayan’s saw strange faces up the river, they decided to change the name to Dzuiluinicob – meaning river of strange faces. It is recently known as “The New River” which was named by the British. 1700-1800 AD. The unique river flows from South to North, other rivers flow from West to East. 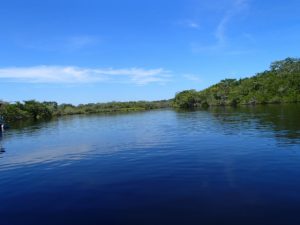 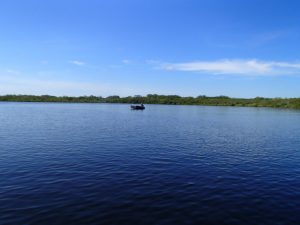 The widest point of the river is a mile across, and narrowest is 30ft across from the underground springs to where it empties into the sea. It is also one of the largest inland water resources in the country of Belize.

The distance from the boat dock at Lamanai Eco Tours to the Lamanai Maya Site is 25 miles. 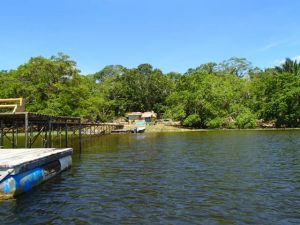 As you bask in the ambience of the beauty along the river on the way to the Lamanai Maya Site, you will be intrigued at the wildlife especially the great variety of birds, bats, crocodiles, different trees and plants. 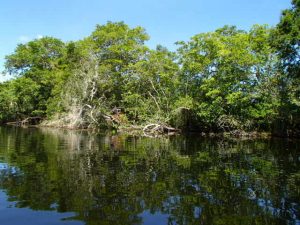 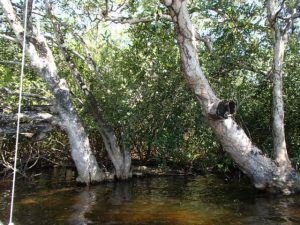 Hurricane Earl hit Belize on August 4th, 2016. The devastation and ruin are still evident today. The Lamanai Maya Site was severely affected, and the entire area was closed for one month. This closure would obviously be damaging to the income of so many people and companies that relied on the tours to the ruins. So the tour companies got together to organize a cleanup. Various social media sites were used to encourage people to volunteer offering them the boat ride and lunch. Naturally, the Park Rangers, tour operators, guides and their families also volunteered and in seven days the trails were cleared and ready to accept the influx of tourists once more. The teamwork was a great success.

As I mentioned earlier I went to the Lamanai Maya Site; I joined another of Lamanai Eco Tours group. Our guide was Nate, and what a fabulous guide he is. Before heading off on the trails we were served lunch – Rice and beans (traditional Belizean meal), stewed chicken, fried Platanas, coleslaw and a green salad and for those like hot stuff, there was a salsa made from Habaneros. I had two helpings it was so delicious. Our tummies satisfied and after having a look at the little museum, we started on the trails to the first of three ruins. The archaeologists named the ruins. 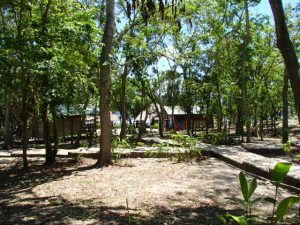 The first ruin is the Mask Temple; it is the only temple that homes a body of a king but unfortunately due to abuse of tourists over the years it is now sealed and closed to the public. There is another tomb a few meters away from the Mask Temple wherein a Queen lays. The difference in years between the King and the Queen is six hundred years, and therefore they are not related. The ruin gets its name from the masked faces in the front. Originally this temple was built by the Olmec and later the Maya. 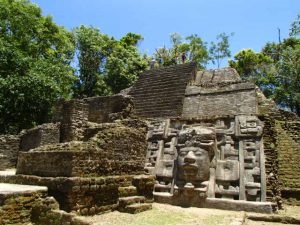 The second ruin is the High Temple; it is high! It is spectacular! It is the largest of the three and stands thirty-three meters high. The view from the top is breath-taking. This temple was used for Sacrificing, offering and as a look out to the stars at night and the sun at dawn. Remember that the stars played a vital role in the lives of the Mayan. 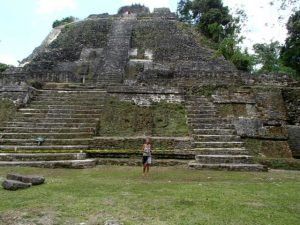 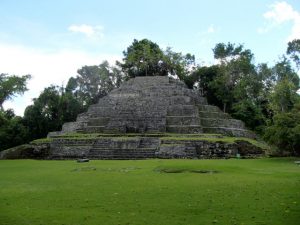 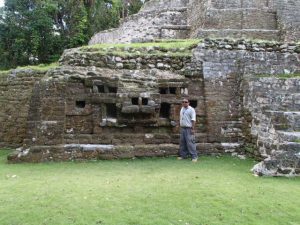 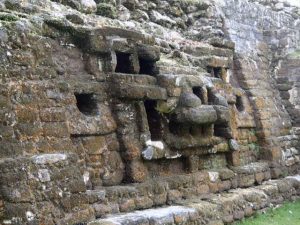 An interesting fact; All ruins are built symmetrically. The ruin you see will always have another three with it – one in front of it and two on the sides. They might not be as large as the one you can see, but they are there.

The entire Lamanai Maya site consists of seven hundred ruins and only ten percent has been excavated. Personally, I prefer the idea of the rest being left unexcavated; it gives the feel of mystery and intrigue. Belize is a flat country, so if you see a mound or a hill, it is, in fact, a ruin that is covered by natural vegetation. The ruins are all connected by roads which have been neatly covered and protected from the endless stream of footsteps. Where the ruins are connected it would be called a Plaza, the people did not live here; they lived on the outskirts of town, but this is where they came to trade and worship. 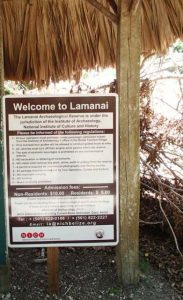 A while ago I did a blog on Xcaret, (read about it here), and mentioned that during the show they played a ball game. Well here, nearby the high temple is a ball game park. There is no history as to how the game was played, as some parks have hoops and others don’t; some have stepped side walls and others are vertical. It was still so amazing to see the remnants of this mysterious part of life. 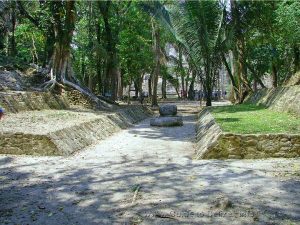 There are many Howler and Spider monkeys that can be seen and heard throughout the day. Toucan birds also live comfortably in the lush trees but unfortunately, we never got to see one. 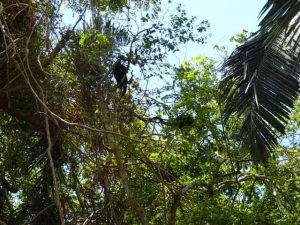 So while I was taken back in time and relishing every moment of it, Ali was in his element fishing. 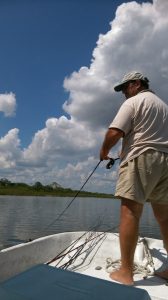 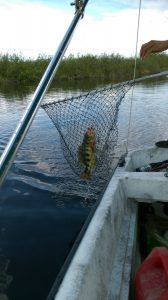 Errol and Edward took the boat further up the river in the hope of a catch. Ali was the first to hook a Base Snook, and he also hooked two Tarpons; one jumped off the hook when it was out of the water. By the time they returned to the Lamanai Maya site the cooler box was half full of fish. 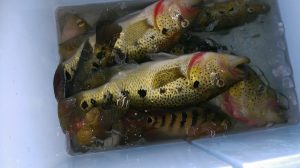 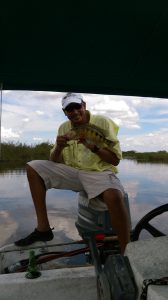 Taking a slow ride back to the docks we stopped at several spots to fish; It was a beautiful site watching the Tarpons roll out of the water several at a time; they were however not enticed to take a bite of the bait on the hooks.

Fish that can be caught in this river are Tarpons, Cichlid, Bass Snook, and Jack.

The weather changed incredibly fast, and before we knew it the thunderous clouds and lightening were surrounding us, and we had to cut our time on the river short, much to the disappointment of the fisherman. 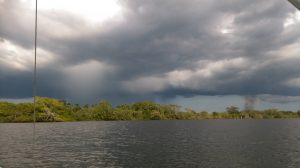 If ever you go to Belize, and you don’t go on a Lamanai Eco Tours you have missed out on the best day Belize will offer you. 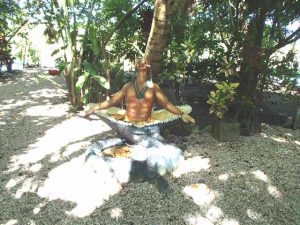 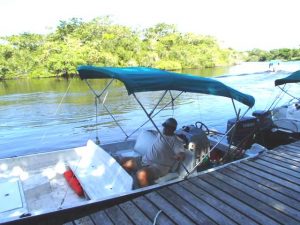 I have so many more photos to share with you, and they can be found here on our Facebook site https://www.facebook.com/AliandAileenMissions/