Belize City – a disappointing, crime ridden city and it’s such a shame as it has so much potential to be great. 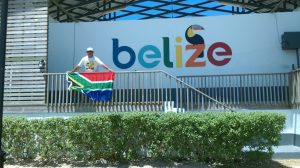 We arrived on the chicken bus from Orange Walk Town (read about it here) and found out that Kings street was directly across from the bus terminal. With our backpacks on our backs we began the walk to our Inn – The Caribbean Palms Inn. Not the wisest thing to do.

As we stepped off the bus the South African streetwise inner alert immediately kick in. We felt unsafe and uneasy with the state of the city. The usual taxi drivers haggled for you to take a cab but it was the onlookers that lurked about that alerted the awareness in us.

Half way along the .76km street two young boys came riding past us on bicycles, they had their faces half covered with scarves and immediately looked suspicious. They circled around and past us several times. At a crossroads one of the boys got off is bike leaving it on the road crossing King street, the other boy circled around to the back of us. Then an adult man came walking down the road that crossed King street calling out to us. Well aware of what was about to go down Ali and I hurried our pace criss-crossing King street and side stepping between the parked cars. After another two blocks they all disappeared – a narrow escape and our first impression of Belize City.

The Caribbean Palms Inn, our accommodation for one evening, is a budget Inn with the absolute bare necessities but still clean and hospitable. The ladies at the reception are very friendly and helpful in advising what and where to go in Belize City. 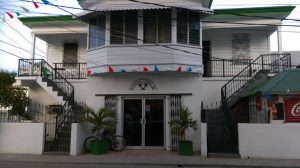 Belize City as is with the rest of the country, a poor run down and decaying city. Don’t wander further than two to three blocks up from the ocean – and even then always be aware of your surroundings. The homeless are everywhere, on every street and in the front of almost every shop, passed out on the sidewalks or drinking (amongst other addictions) in the nooks and crooks of the buildings. 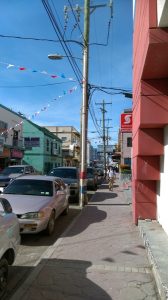 We thought that with the ocean liners docking at Belize City the ocean front would be pleasant and complimented with the usual tourist shops and vibes – not so. The ocean liners park way out at sea and tourist have to take a forty minute ride with the ferry to city. Most tourists however, go on shore excursions to the Islands like Caye Caulker and spend their time there not ever stepping a foot on Belize City.

The Museum of Belize is small but very neat, clean and well organized, it even offers free wifi. Most of the theme is based on the enslavement which is very depressing but it is worth going to. The have a fabulous collection of Jade jewels and artefacts and a Belizean Flag that was salvaged from the 911 attack. 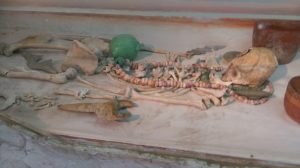 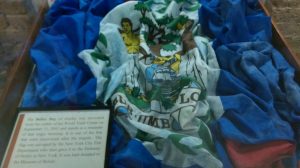 Our friend from Cozumel, Dave – Dave’s House introduced us to his friend, Robert, who lives in Belize City. What a wonderful and friendly man, we immediately clicked and with thanks to him we got to see the South side of Belize City. The city is divided by the Belize River and where we were situated an old Swing Bridge was the means of crossing from one side to the other. The river meets the ocean front and this is where the ferries dock. It honestly has the potential to be a spectacular water front if only the effort and money was spent on it. The beach front has no beach only huge boulders and rocks. 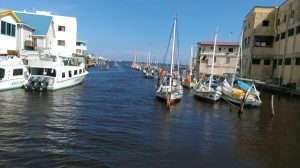 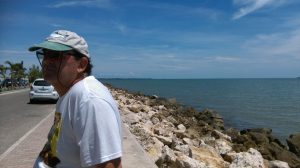 The best place in Belize City is the Bird Isle Restaurant. Robert took us there for lunch and we had fabulous meal of rice and beans, grilled chicken, potato and green salad with watermelon juice. As I mentioned in an earlier blog Hurricane Earl did a lot of damage to Belize and the evidence is still visible. At Bird Isle Restaurant there is (or was) a ball park. The photo shows the total destruction of the park, it will not be rebuilt here but elsewhere in the near future. If you’re in Belize City this is a must-go-to place, the day we went was their first day open since Hurricane Earl on August 4th, 2016. 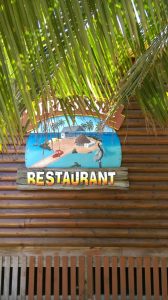 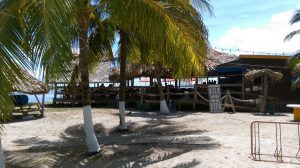 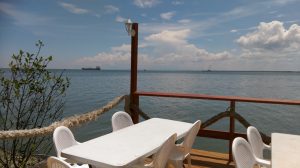 With the mounds of rubble and plant life stacked all over the city one can only imagine how destructive Hurricane Earl was, and in saying that, the decay of the city does not only belong to the hurricane but comes from years of neglect. Robert took us on a tour through the south side of the city – the bad side. A play park for children is surrounded by walls of graves. Each block of the wall contains the ashes of people that died in an epiddemic of diseases many years ago. 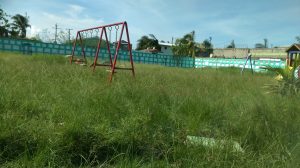 Robert took us to the bus terminal, we definitely were not going to walk again, and we are very grateful for the time and effort he took to show us his city. As bad as it may be Robert loves Belize City and his country.